Overview of Installation and Setup of Cobot Welder, Powered by Beacon™
M
Written by Matt Bush
Updated over a week ago

When the system arrives it will be contained on a single 4' x 6' pallet almost ready to use.

What's Included in the Box

This system will arrive palletized with the welding equipment already installed into the cart. You will simply use the supplied plate and secure it to a table of your choosing using 5/8" bolts or by simply welding the plate to the table.

What's Included in the Box

Installation and setup of the system is as simple as

If you have followed all of the instructions the system should now be ready for operation. Congratulations on the installation of your Cobot Welder, Powered by Beacon™. Now that you have installed the system, there is one final task to perform and that is securing the touch pendant on your system to prevent accidental changes to robot programs and settings. You can learn how to do that in Securing your Cobot Welder.

When the system arrives it will be on a 4' x 6' pallet. The first step is to inspect the system, if you see any damage at all please report it to the freight company upon receipt of the shipment.

The system should arrive with a cardboard sleeve and lid on the pallet. 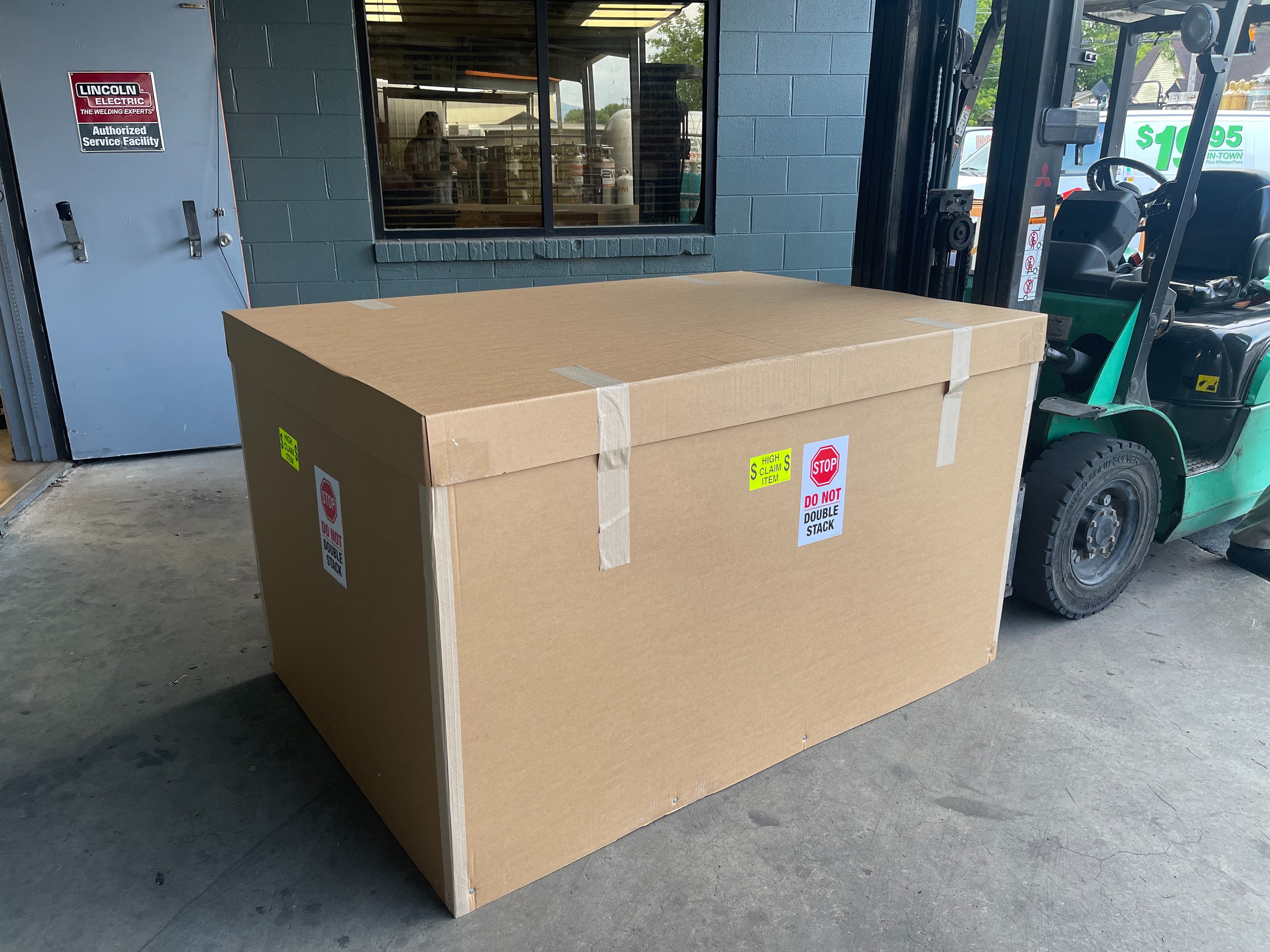 Remove the lid and sleeve from around the pallet 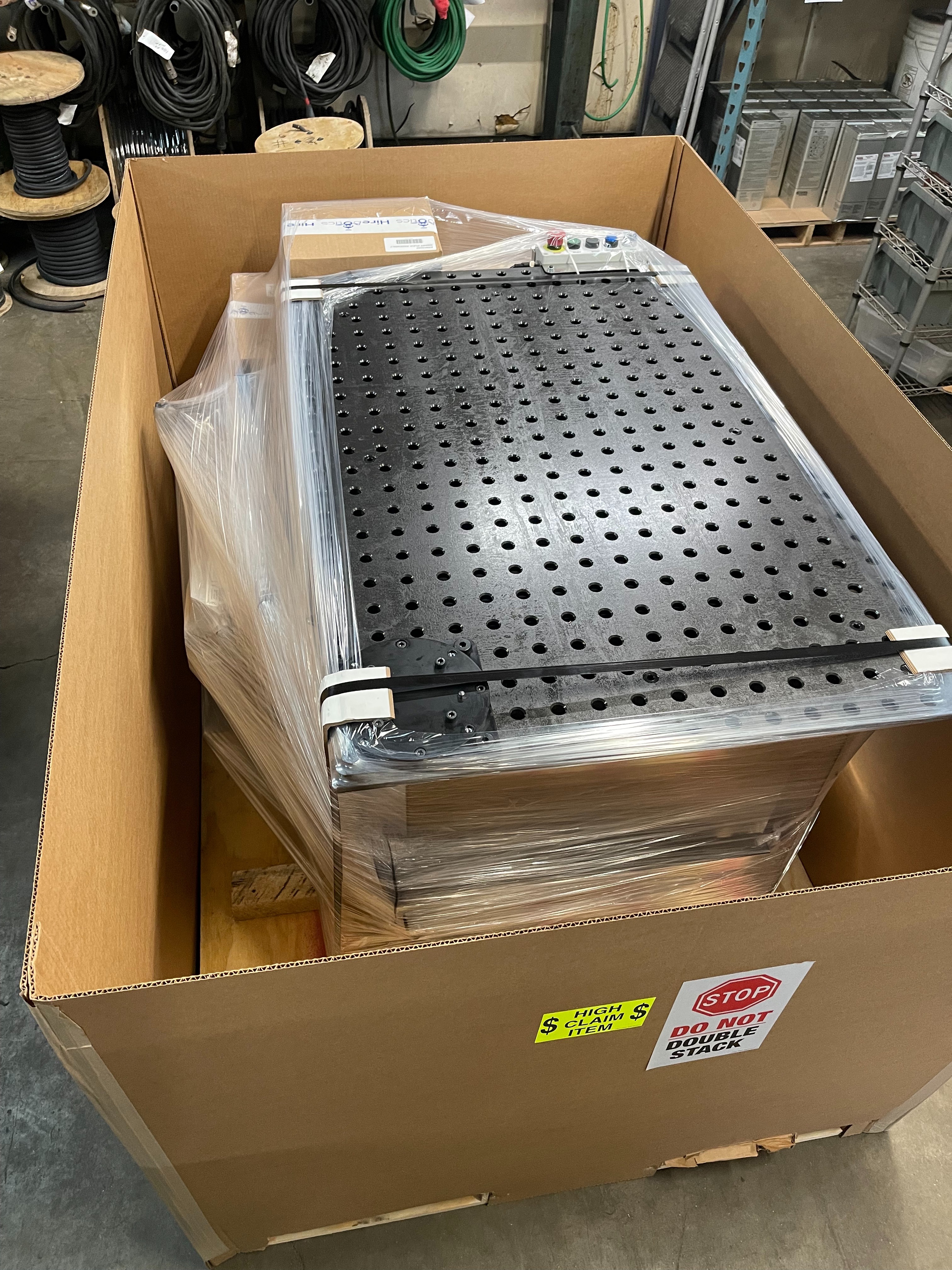 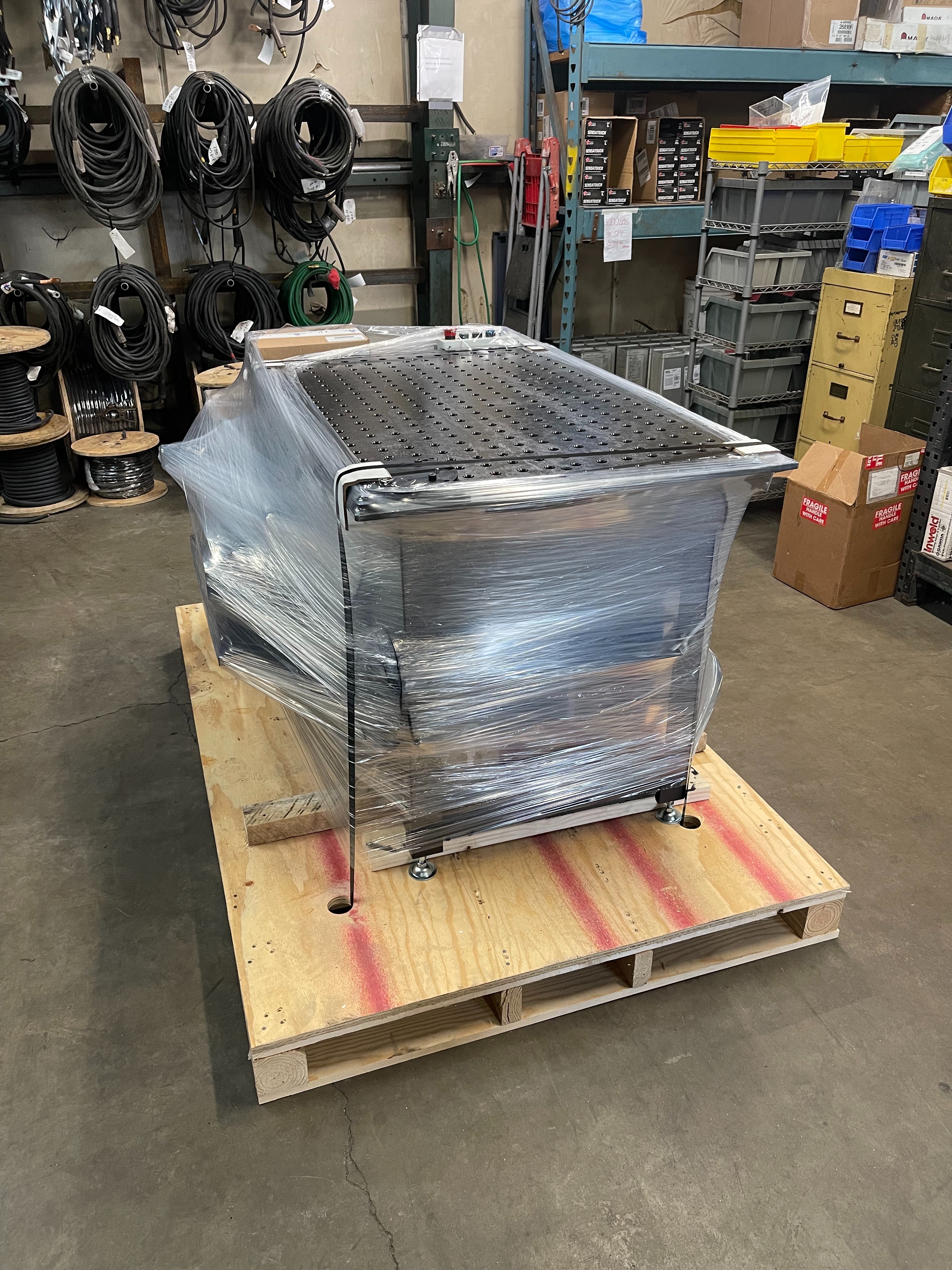 Next, remove the bands and shrink wrap from the cart and boxes. Remove the boxes from the pallet and see to the side.

CAUTION: The box containing the robot arm is heavy and not well balanced, use two people to lift the box from the pallet. 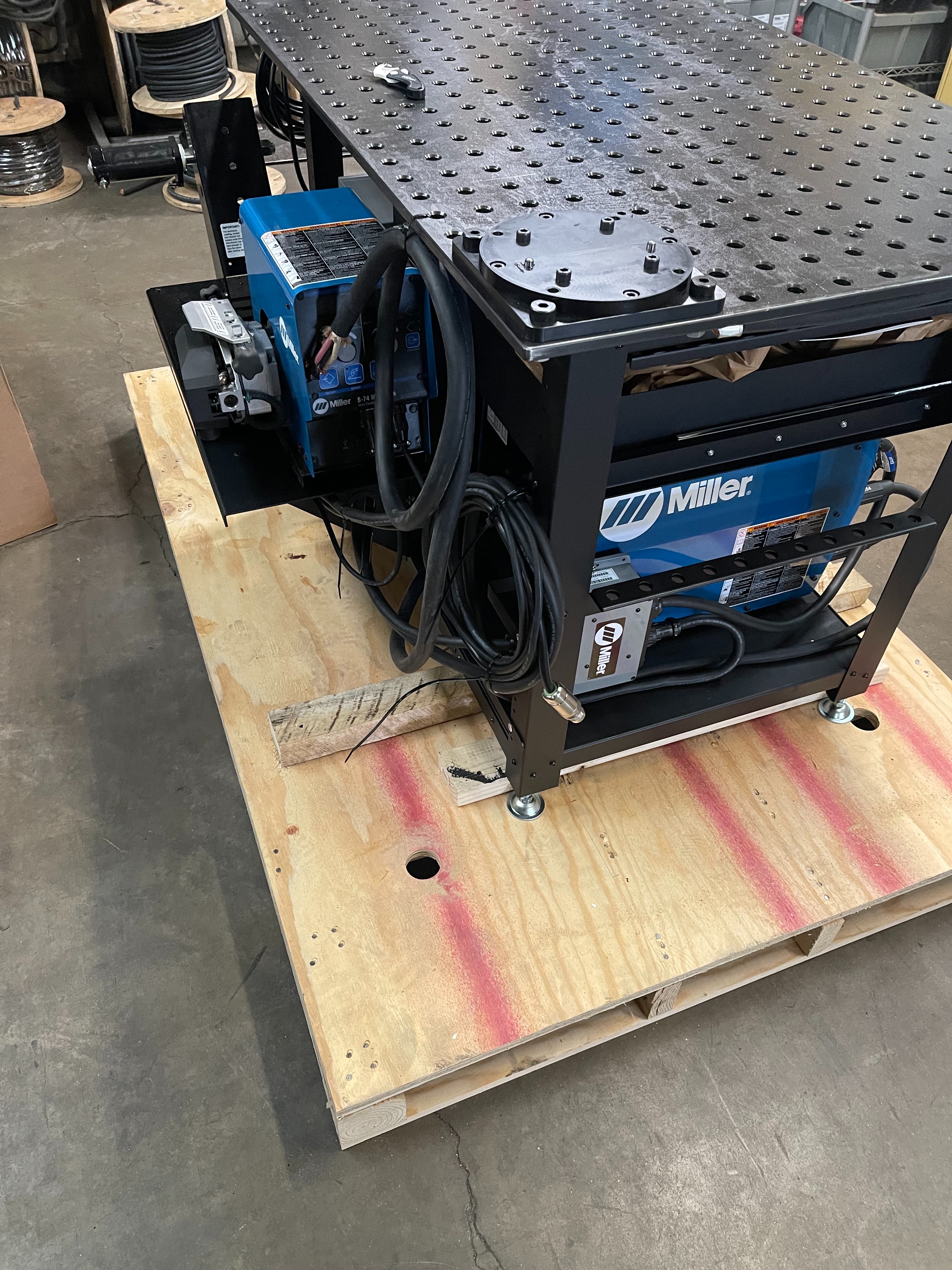 Remove the braces that are attached to the pallet top securing the fixed casters in place. 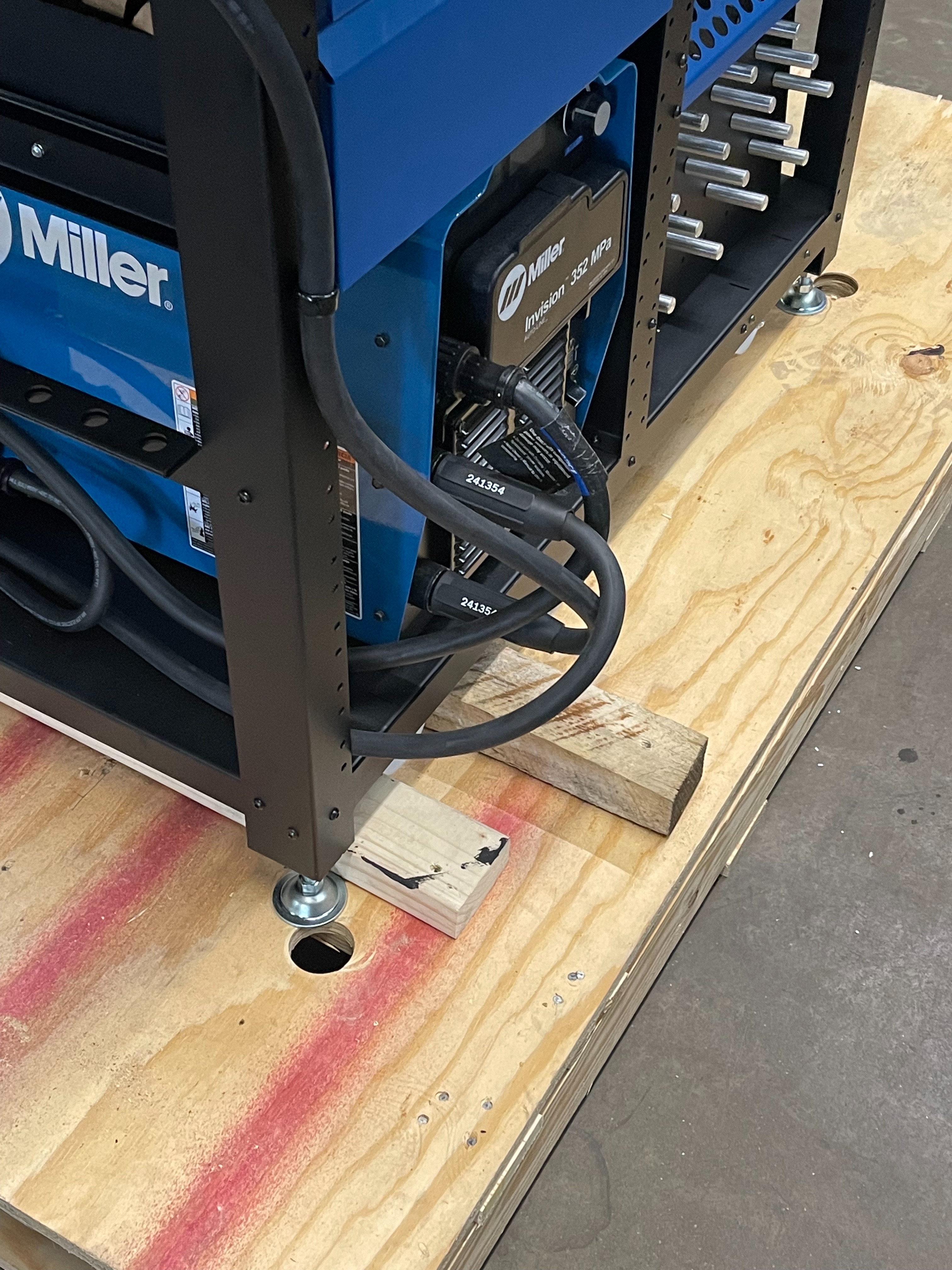 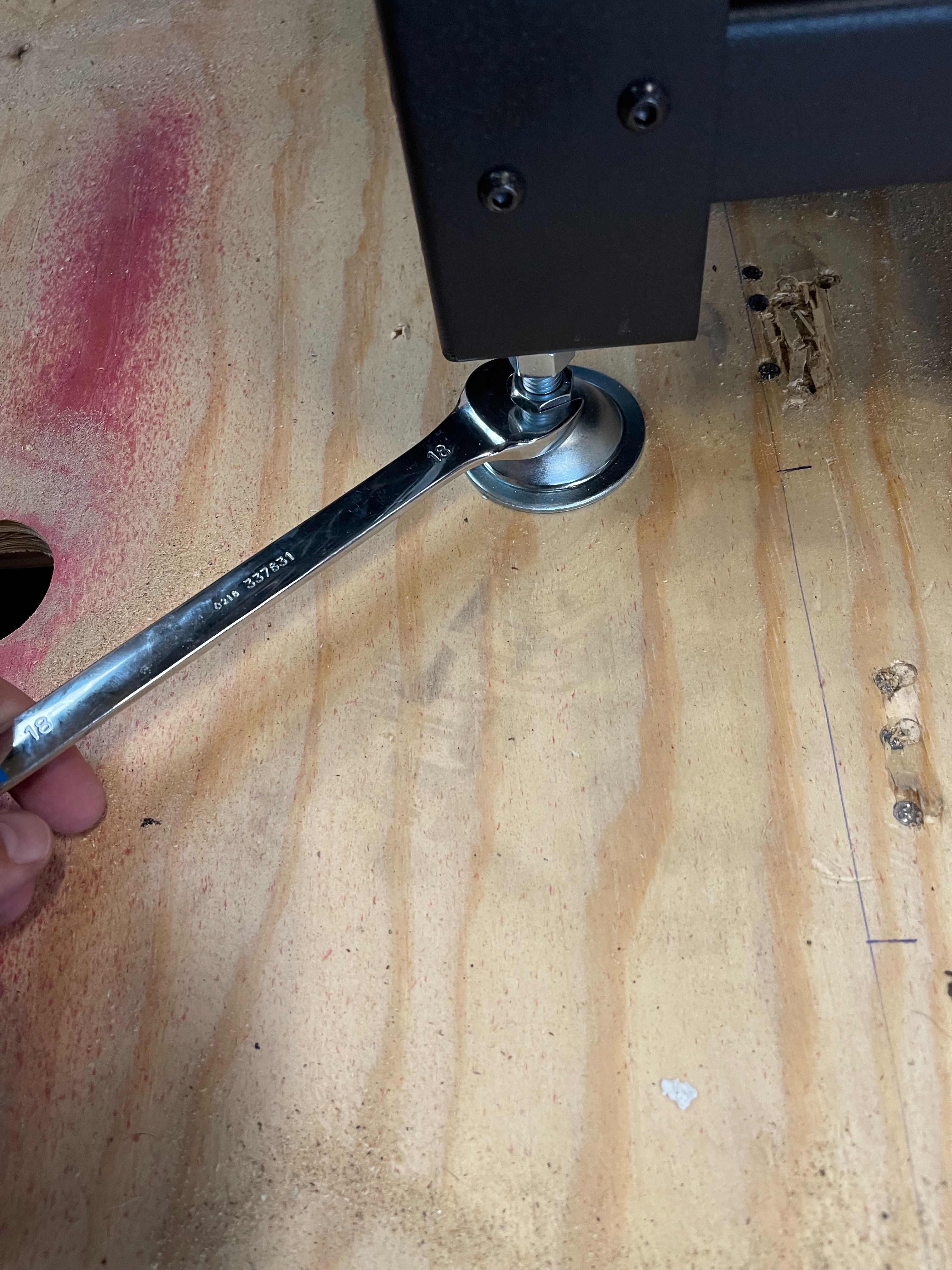 Using a fork truck, gently lift the table from the pallet and place it on the floor.

CAUTION: The table is not balanced as the welder is on one end of the table and the feeder is on the side. Use caution when lifting to ensure the load is secure before lifting.

Open the box containing the arm and remove the box labeled Robot Plate Hardware. These are the M8x1.25 SHCS bolts that will be used to mount the arm to the phenolic spacer on the table. 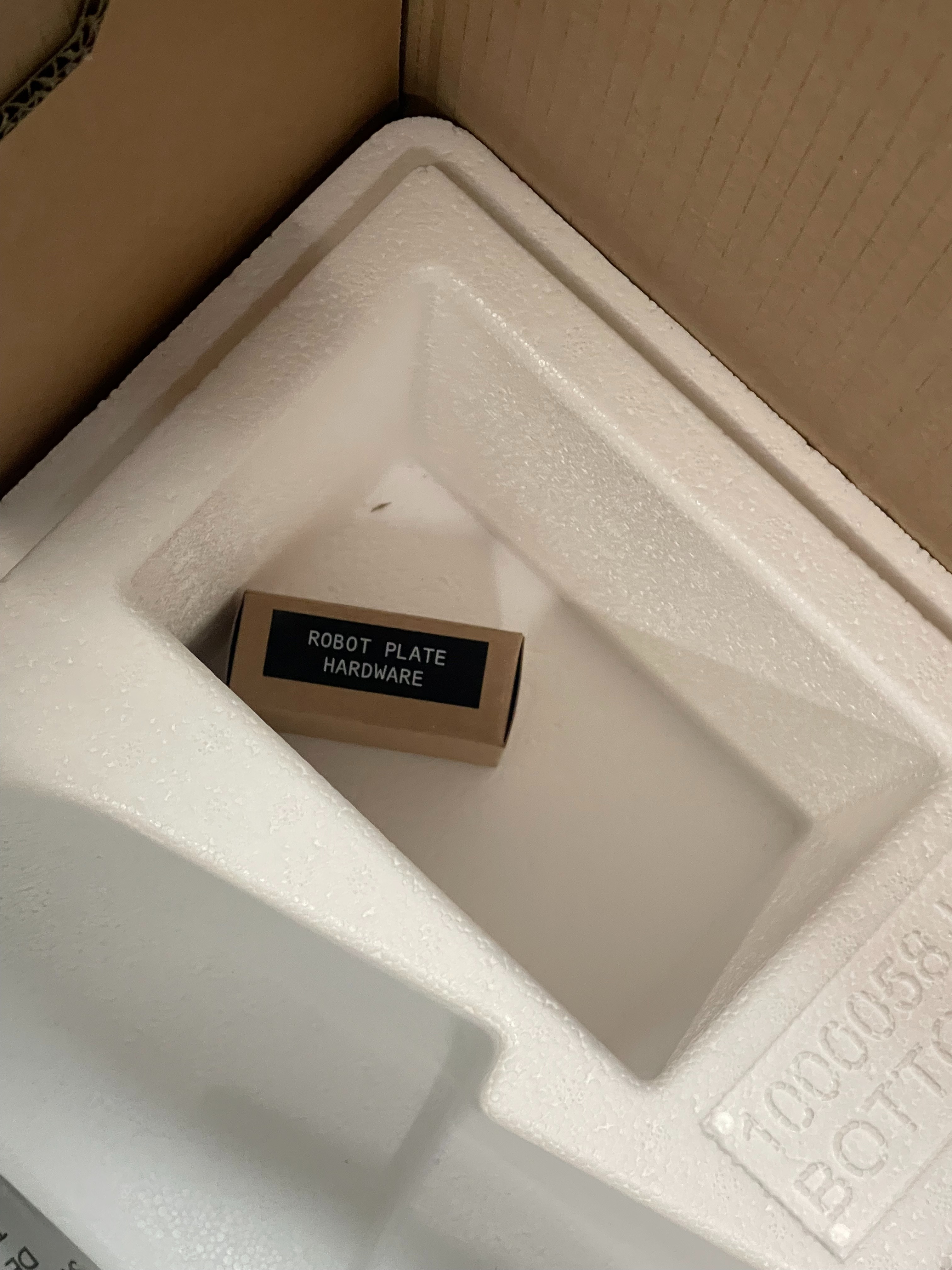 Once you have the hardware available remove the arm from the box and place it on the table. Note the orientation of the dowels in the plate as they will align with holes in the underside of the robot. The cable exits the side of the table from under the robot. The bolts are installed using a 7mm Allen Key or preferably torque wrench. Tighten the bolts to 15 ft-lb (177 in-lb). 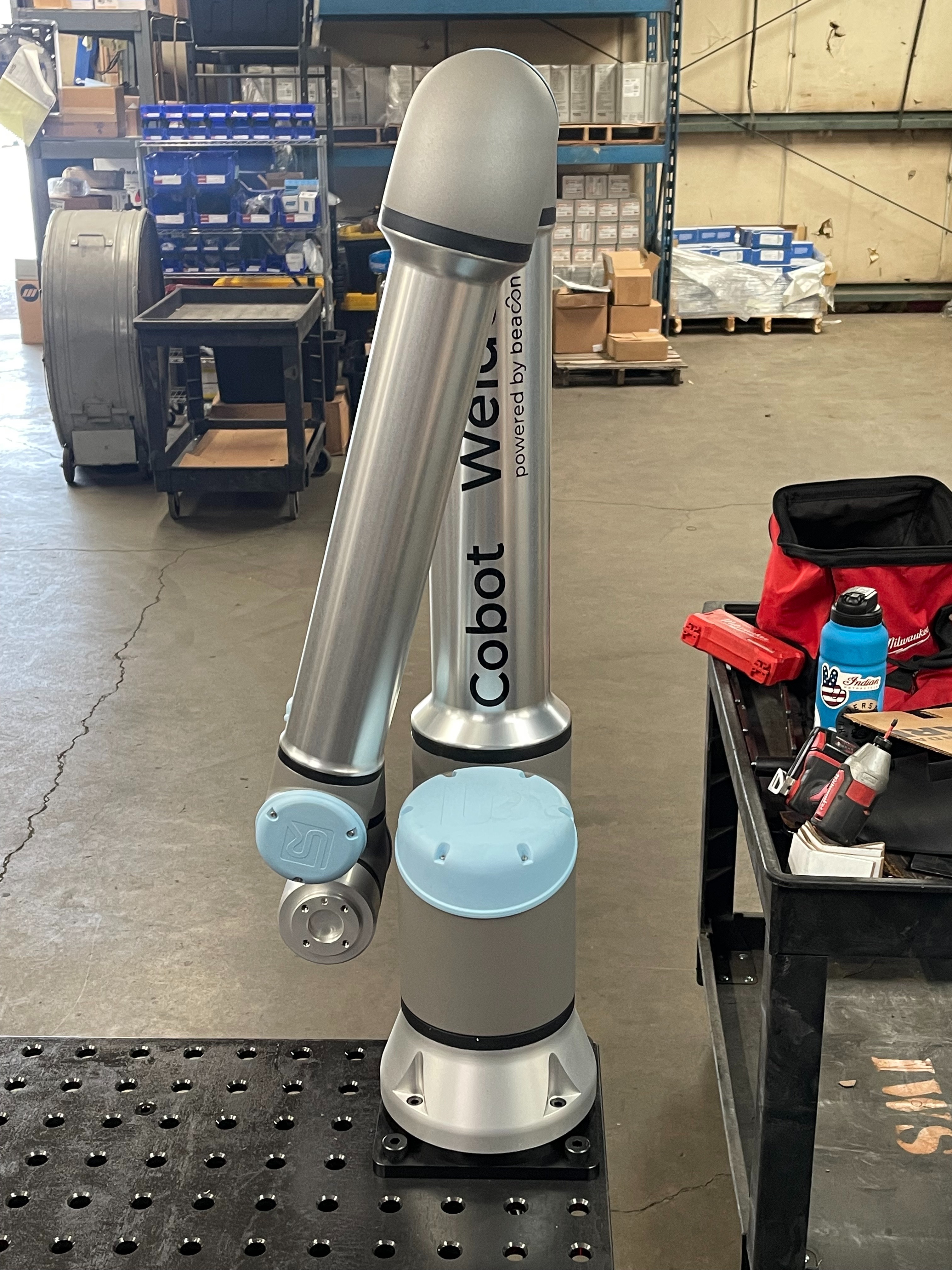 CAUTION: The arm is heavy, approximately 90 pounds and most of the weight is on the base end, use two people when lifting the arm from the box and placing it on the table. When securing to the table use one person to balance the arm while the other installs the hardware.

Connect Robot To Power and Internet

Connect the communication and power cable to the base of the robot. The main cable is secured to the back of the table with enough slack to connect to the pigtail at the robot base. To connect align the connectors and press them securely into place. Ensure that the locking connector ring is unlocked prior to attempting to install the cable. Once the cable is fully seated, rotate the locking ring to lock the two connectors together.

There is an ethernet cable attached to the network port on the robot cabinet, if a longer cable is required, unplug this cable and plug the new cable in its place. 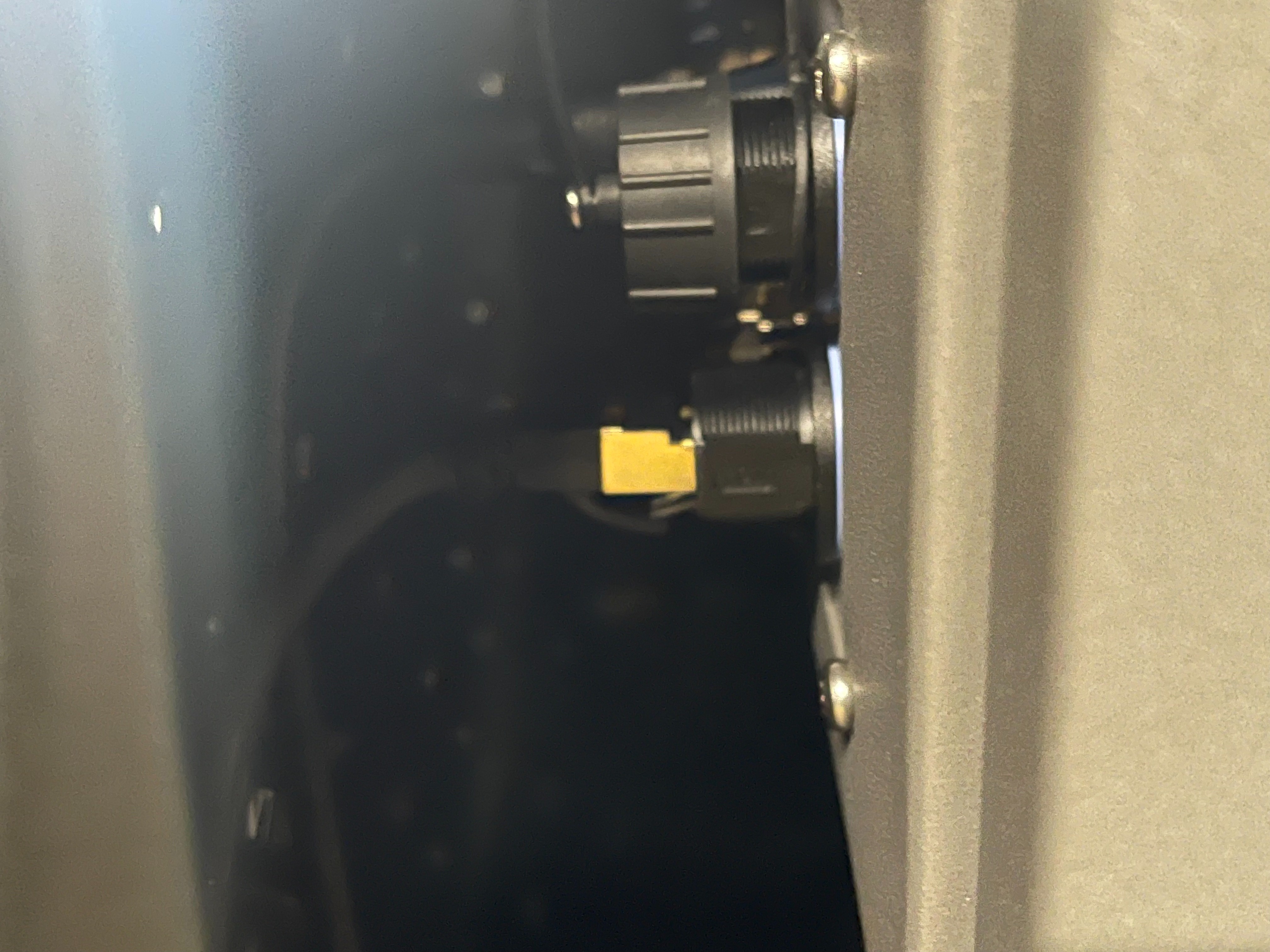 Remove the teach pendant from the cabinet and remove the protective wrap and cardboard shipping screen protector. 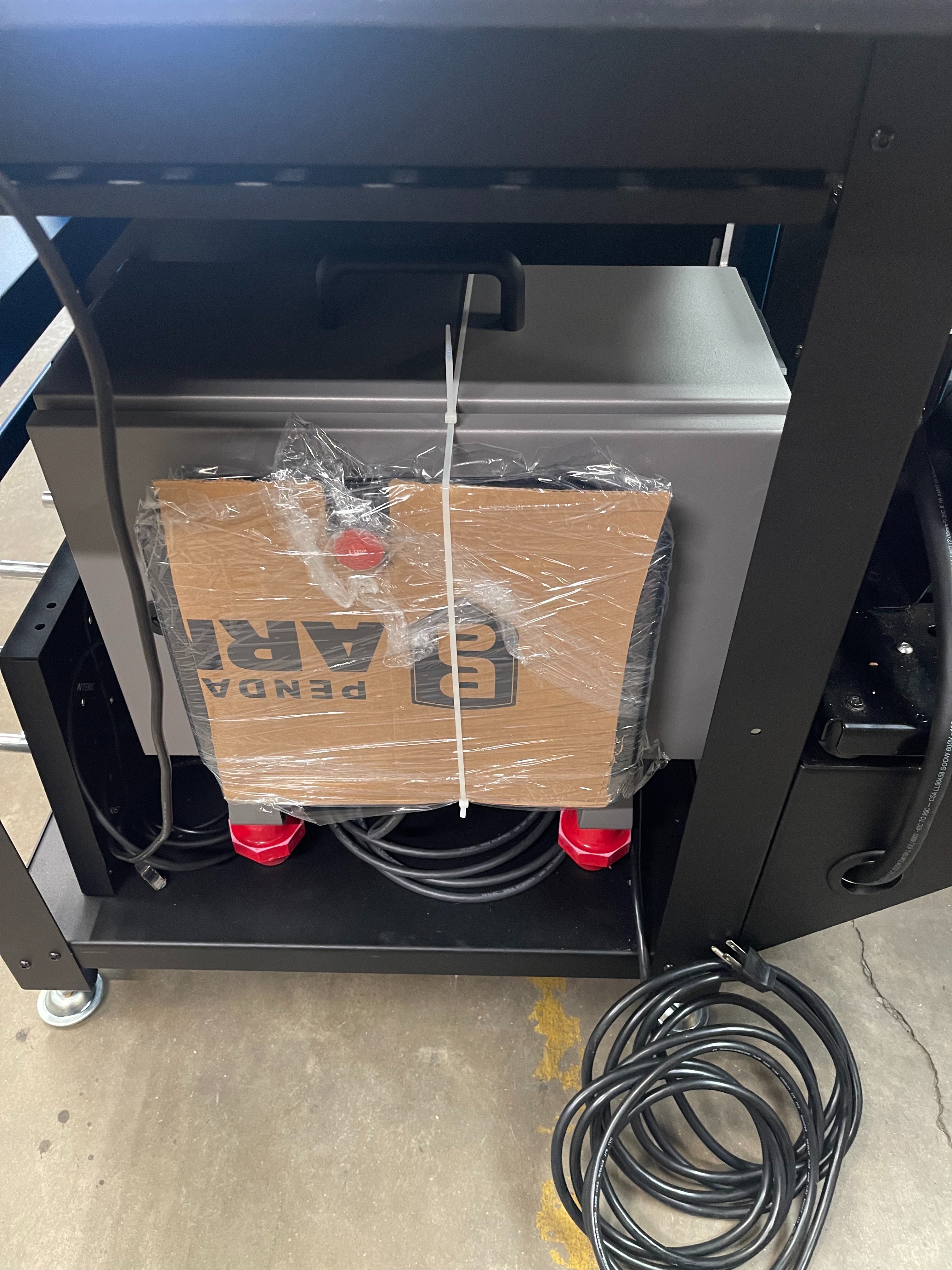 Press the power button on the robot controller to start the controller. Once the robot has powered on, follow the prompts on the screen to initialize the arm.

To enable the installation of the torch assembly onto the arm it's important that the arm be placed in the default start position. To accomplish this we are going to learn to create a part flow on the robot using the Beacon app.

If you have not already done so, download the Beacon app onto a phone or tablet or access it on a computer via beacon.hirebotics.io. Before entering an email address, ensure that address has been added to the Beacon app by your company administrator. This will ensure that you are logging into your organization.

Once you have logged in, navigate to the team where the robot has been registered and click on robots. Follow along in the video below to see how to create this simple first part flow.

Now that the arm is in the home position you can install the Hirebotics Smart Puck system. This will already have attached to it the Tregaskiss gun mount for mounting the torch.

To install the Smart Puck, remove it from the box. Using the supplied Torx key remove the 6 screws from around the perimeter of the puck and separate them into the two halves. Using the (4) supplied short head cap screws and an M4 Allen key install the tool flange adapter onto the robot. 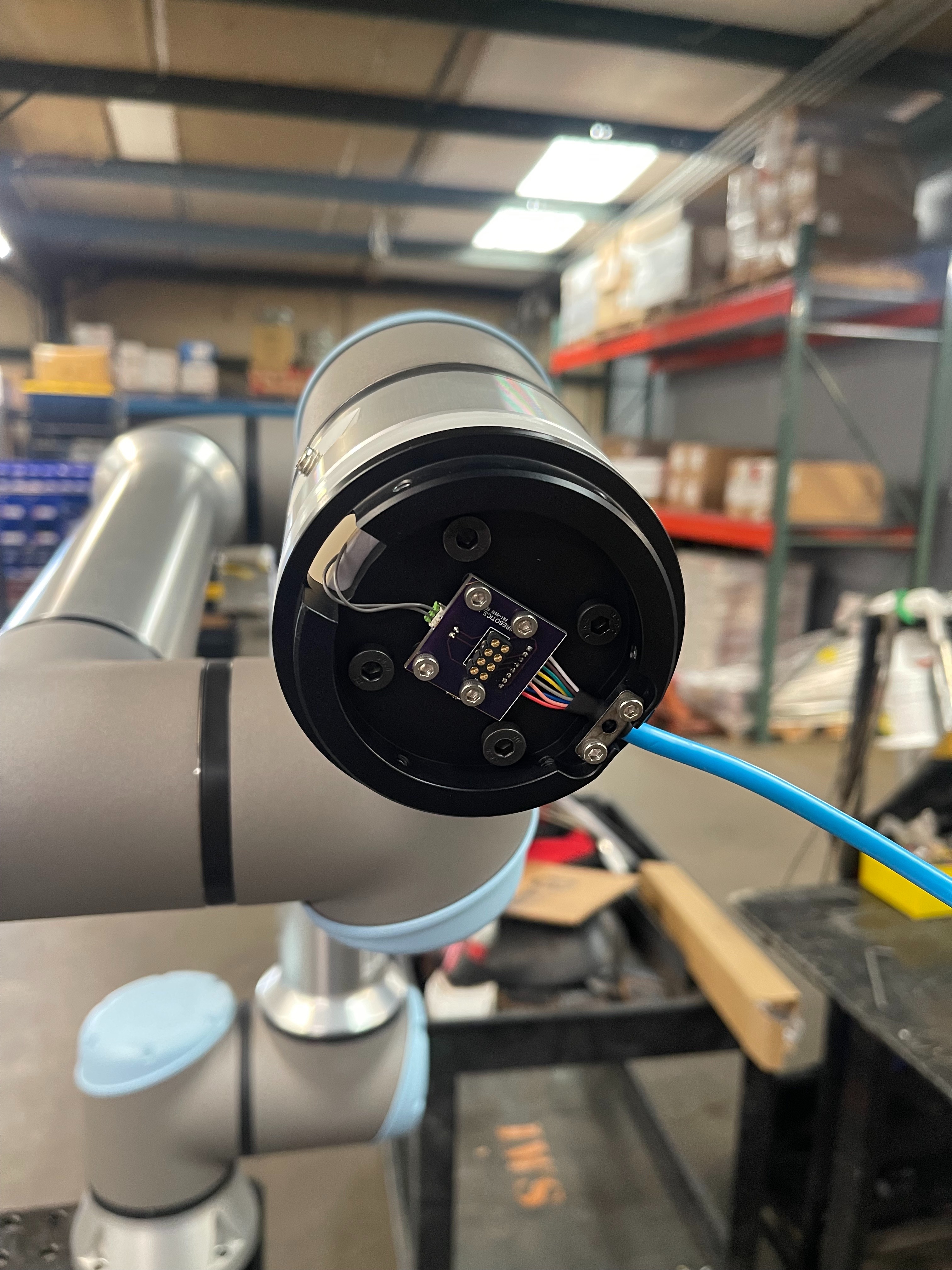 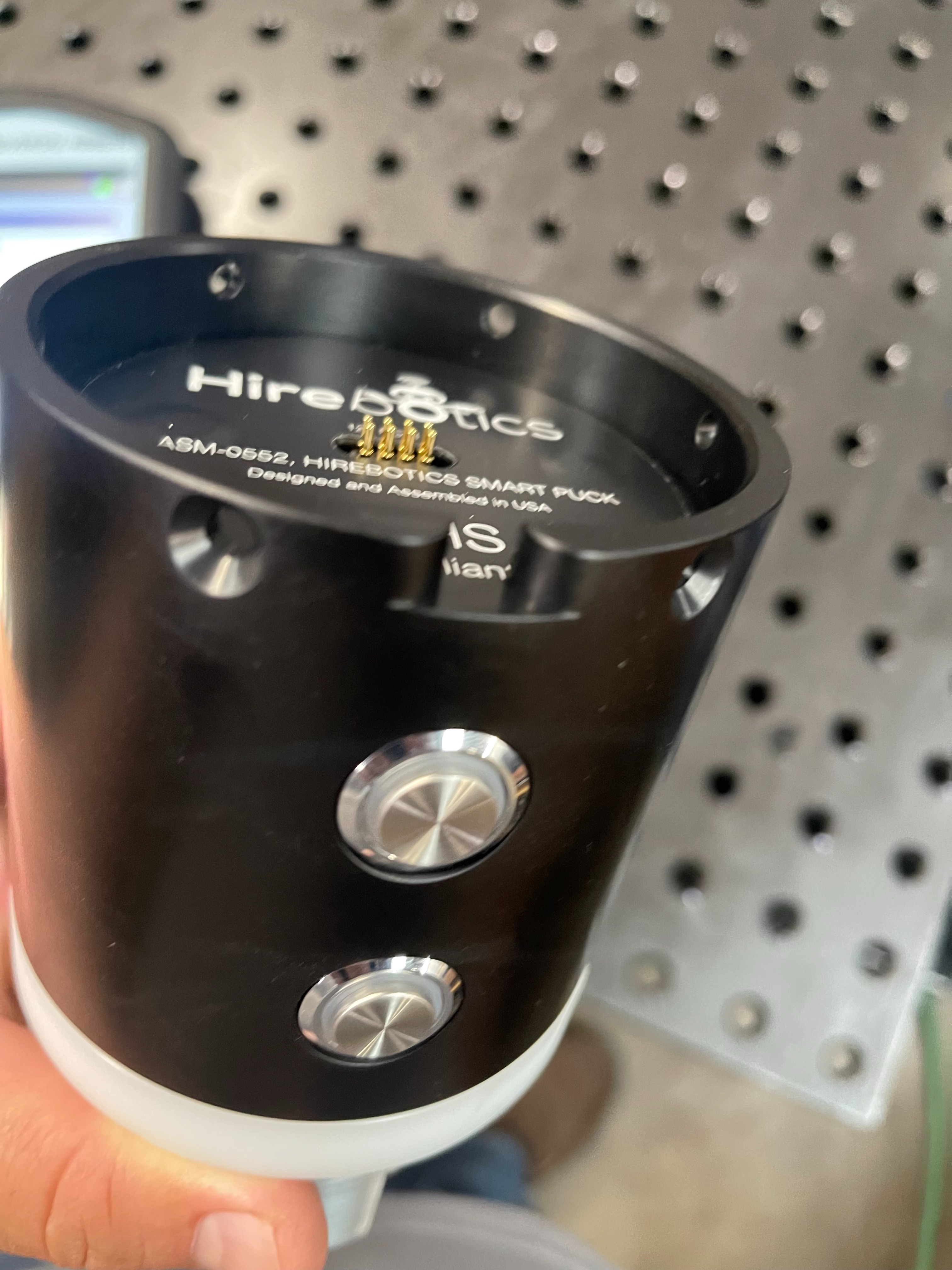 Once you have secured the lower half onto the robot, plug the blue cable into the port on the end of the robot arm. 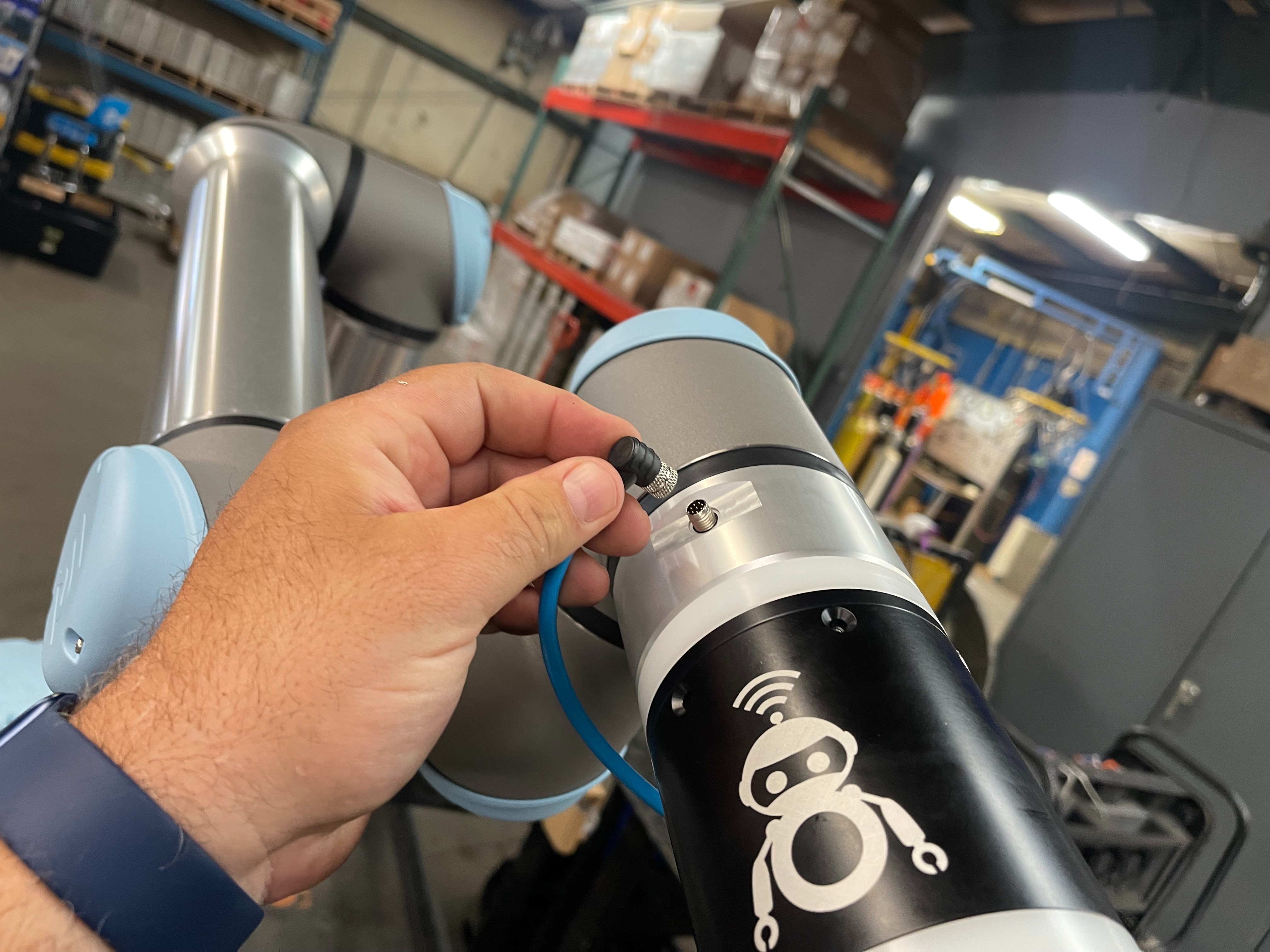 Remove the Over the Arm Cable assembly from the box. There will be two assemblies in the box. The lower clamp mount which will be mounted on the lower arm in the middle of the arm and the upper arm mount, the "Shark Fin".

Using a deep well 7/16" socket, open the clamp that is attached to the lower mount and position it in the middle of the lower robot arm on the back of the arm. Using the socket tighten the clamp onto the robot 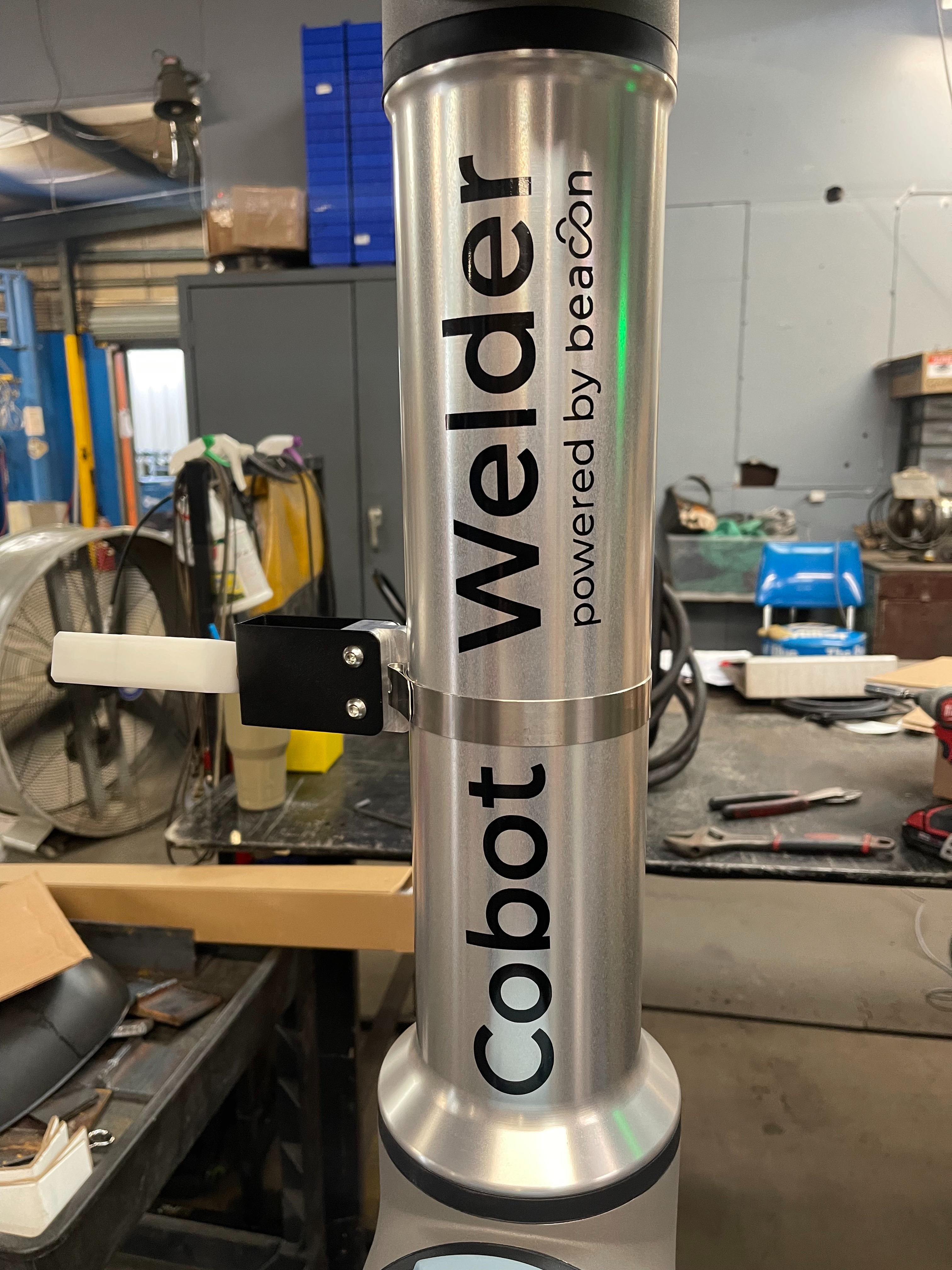 Using the 7/16" socket remove the nut from the two clamps on the "Shark Fin" and install it on the upper arm. It needs to be installed as far to the rear of the upper arm as possible to guide the torch over the elbow of the robot. 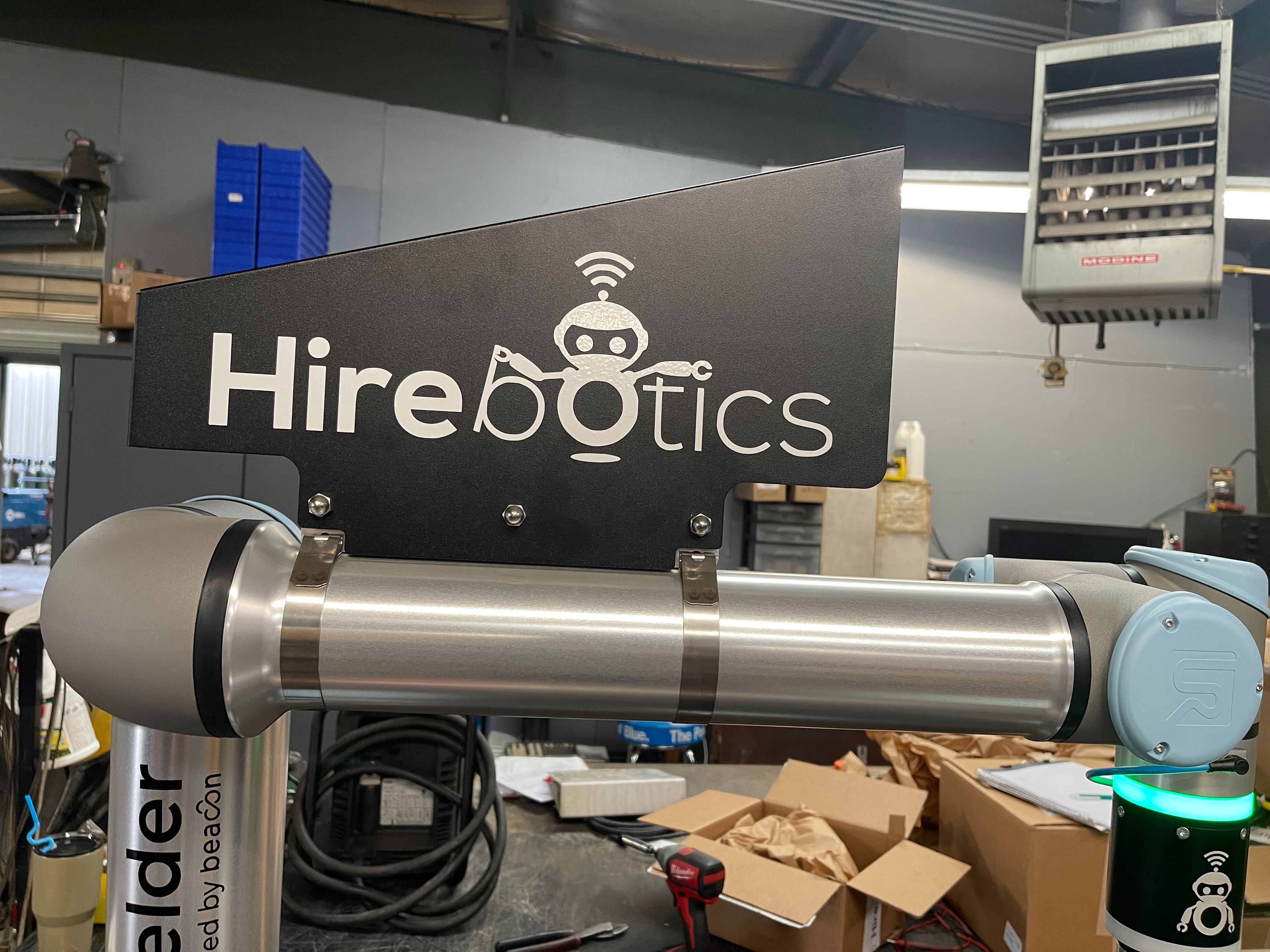 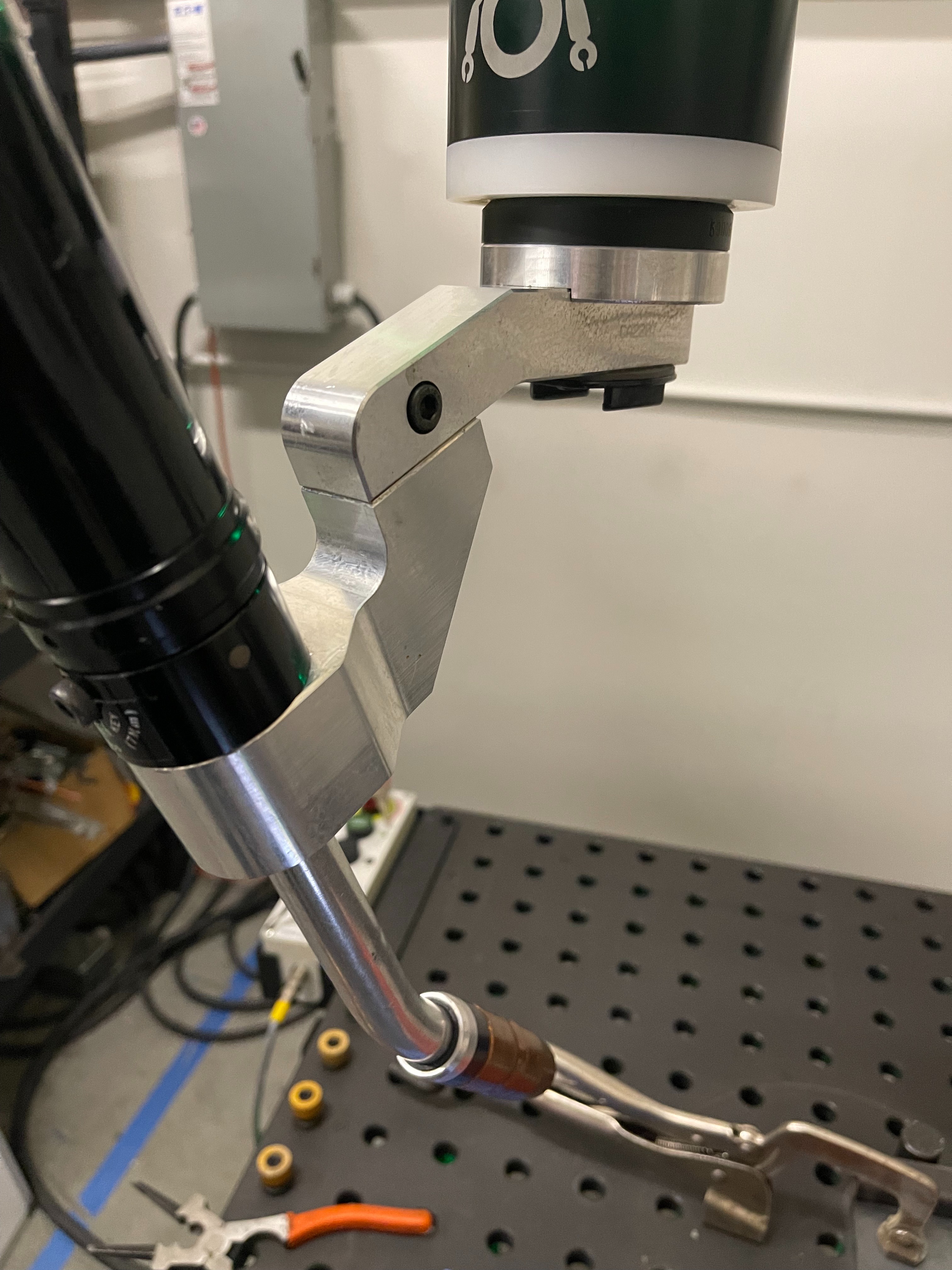 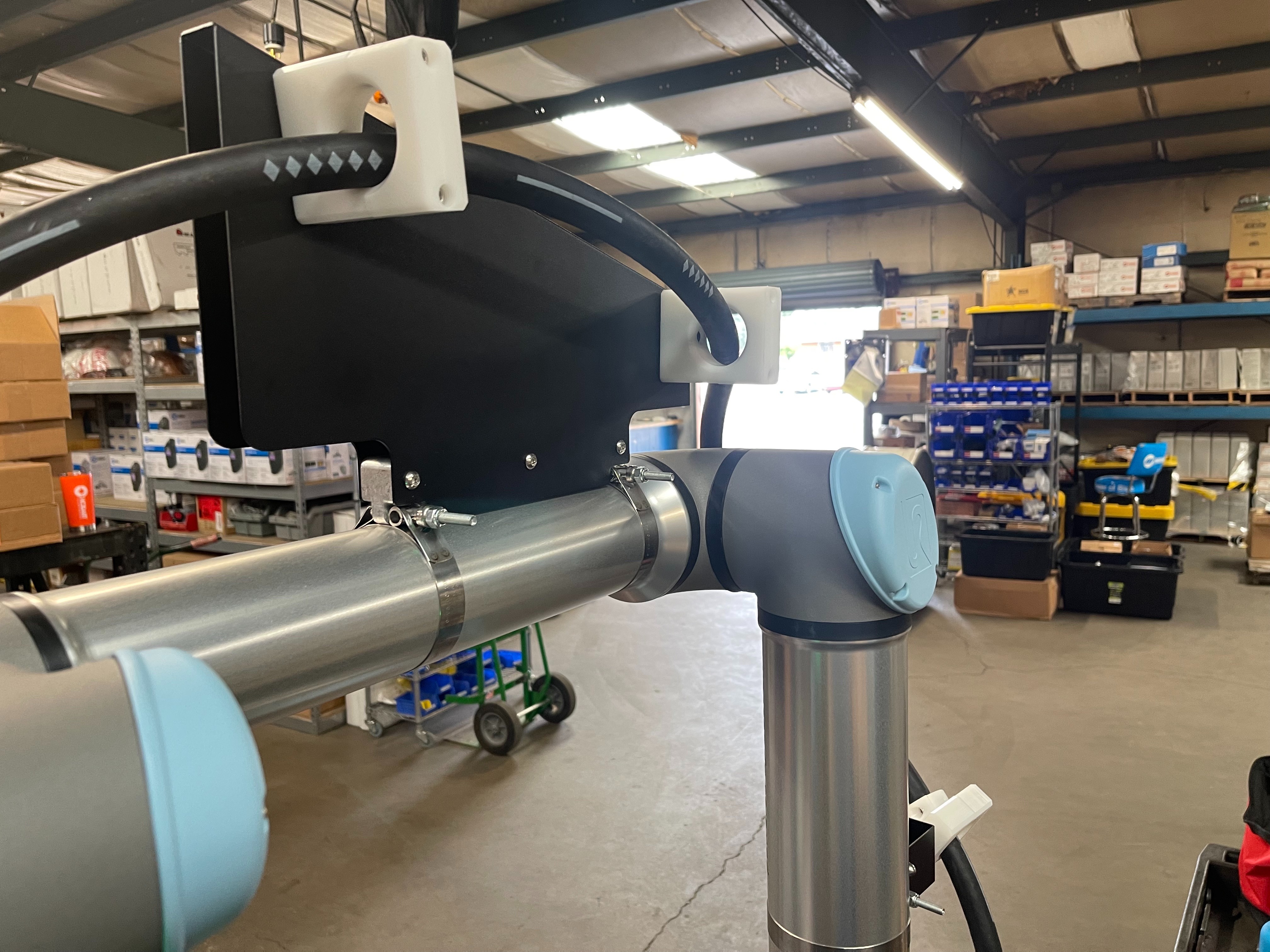 The welder comes with a pigtail that can be connected to your building power either through direct wiring to a disconnect or via a twist-lock style plug. The decision on how to wire the welder is up to the customer. Ensure that the welder is wired to the appropriate voltage and amperage limit per the welder manufacturer's recommendations. The user manual for the welder will be located in the drawer in the table when the system arrives.